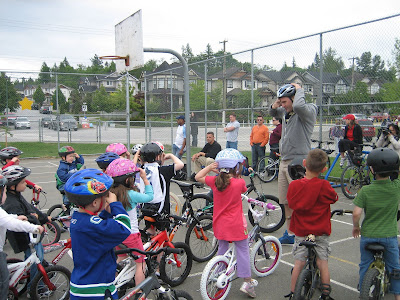 This afternoon the Bike to School team of the Vancouver Area Cycling Coalition organized a Family Bike Festival at Albion Elementary School. Some 60 kids showed up with their bikes – far exceeding expectations – to decorate their bikes, to learn more about bike safety, and to have some fun maneouvring their bikes around and between pilons. After all the stations with various bike exercises were completed, the group went for a ride through the neighbourhood, bringing into practice the things that they had just learned. The kids got to take home some neat prizes. This was the first time such an event was put on at a school in Maple Ridge, and it was a big success! Hopefully this fun afternoon will lead to more kids starting to ride their bikes to school, with parents taking over the role of encouraging their kids to pedal to school on their own power. It would be nice to see similar programs being run in other schools in Maple Ridge and Pitt Meadows. 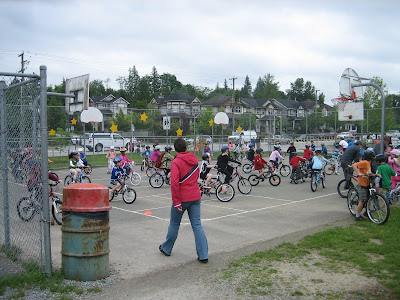