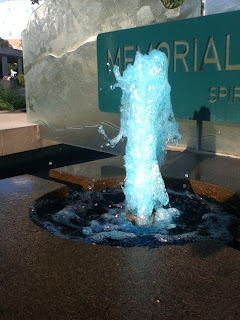 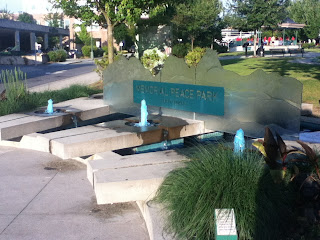 Another non-biking post:
I know it has been bubbling away for a year or so now but today I sent a letter to Mayor and Council as well as to The Maple Ridge News on this “important” matter which has been picking me for some time… oh, so persnickety, I am. I’m wondering if anyone else shares my feeling on this?
– “It’s summer-time and the weather is hot and the mind turns to water; cool, clear refreshing water. But what is with this alien, blue fluid bubbling from the fountains of Cenotaph Park? Is it toxic? It certainly looks dangerous – like antifreeze which we have all learned from a very young age to be fearful of ingesting. Is the coloration meant to scare children away from indulging in the illicit toe-dipping on a sweltering day? Could that be the reason? Well, isn’t that exactly what a city water feature is supposed to do, illicit a fear reaction from passers-by. NOT!
In all seriousness, I think this blue coloration completely destroys the effect of the fountains and makes them repellent in more ways than designed. I am at a loss to decide whether a fountain with weird flowing blue material is infact a community benefit.
What is the true reason for the coloration? Is it also to act as a deterrence to the odd hobo or citizen who wishes to rinse his/her hands in the flowing waters? Urban legend has it that one indigent, many years ago, dare to dip a shirt into the waters and ring it out? If so, so what! Why do we all now have to endure fountains of flowing, blue fluid till the end of time because of it?
In the great-wide-world of urban and village fountains and water-works, has anyone ever seen such a cruel trick? In the tiny squares and great plazas of France and Italy where tourists and locals pause to refresh, has anyone ever seen blue, repellent water? In Granada, Spain’s famed Alhambra Palace, where millions of tourists file thru to see the magical play of water and even dare to touch it, there is no blue, repellent water!
If there are other towns in the world where administrators have opted for such a “scorched-earth” solution to a minor problem I would be equally sad for their citizens who are denied a simple pleasure, that of looking at, hearing AND touching CLEAR, dancing waters.
This blue water is a deterrent all right, it’s an absolute deterrent to any and all enjoyment. Bring back clear, clean, real water to the fountains of Cenotaph Park!”