Planners and politicians from 47 countries recently came together at the 2011 Velo-City Conference in Seville, Spain, from March 23 – 25. This is an international conference on cycling and cycling policies that started in 1980, and has been held in Europe every two years until 2009, after which it has been held annually. In 2010 the Conference “went global”. 2012 will be the first year that it will be held outside Europe, and Vancouver has been cho 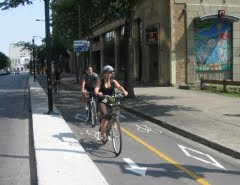 sen as the host city! We have a wave coming our way, and hopefully we’ll be able to ride it!

The conference in Seville concluded with the signing of the Seville Charter. This Charter comprises a 15-point list of advantages and benefits of cycling, and aspires to convince all Ministers of Transport that attend the International Transport Forum (ITF) in Leipzig in May of the fact that cycling simply makes sense. This year the representatives of 53 countries attending the ITF will focus on “Transport and Society”. In light of this theme, the “Charter of Seville” asks these Ministers of Transport to recognize and acknowledge the documented advantages and benefits of cycling as a daily alternative mode of transportation. One of the dignitaries that signed the Charter was Bob Paddon, our very own President of Translink. (Correction: Bob Paddon is TransLink Vice-President, Customer and Public Engagement. TransLink has a CEO, Ian Jarvis).

This Charter is important for Canada to pay attention to. Many countries are finally realizing the huge potential of cycling and are dramatically increasing their funding for cycling infrastructure and education. The U.S., while lagging somewhat behind Canada in cycling participation, is definitely stepping up to the plate. Between 1988 and 1990, annual funding for cycling and walking in the U.S. was about $5 million per year. Between 1992 and 1998 this rose to an annual $150 million. From 1999 to 2005 funding increased to about $360 million per year. Between 2006 and 2009, almost $1 billion per year has been spent federally on cycling and walking in the U.S.*

In contrast to the U.S., there is no regular federal funding for cycling infrastructure in Canada, so financing depends almost entirely on provincial and municipal funding.*

With the federal election coming up, it’s a good idea to ask the candidates what they are planning to do to make sure that the federal government does its share to assist municipalities in their quest to become more sustainable and to provide true multi-modal transportation systems that serve people of all ages and abilities. With the price of gas expected to continue to rise, cycling will undoubtedly become a lot more popular and can provide a low cost way of getting around to a broad range of people, including those do not now own a car, those who can’t afford to and those who cannot or do not drive.

In hilly east Maple Ridge as well as in Silver Valley, the electric bicycle will be a very viable solution, being a much more energy-efficient means of transportation than the private car. Safety is paramount for many people though whether riding a regular or electric bicycle, and investing in safe infrastructure is essential if we want to be able to “ride the wave”!

*Data from “Bicycling Renaissance in North America? An Up-Date and Re-Appraisal of Cycling Trends and Policies” Transportation Research A, Vol. 45, 2011, by John Pucher, Ralph Buehler, and Mark Seinen