Much money is being spent by the District of Maple Ridge on beautification of our downtown – close to $6 million. New sidewalks are going in, with curb bulges to make it easier for pedestrians to cross the street, fancy crosswalk markings, new and more trees and other landscaping, street furniture such as benches and bike racks. The idea is that all this will provide a more attractive environment for people, so that we will be more likely to park our cars and walk, or bike, around and we’ll hopefully choose to shop in our own town rather than to drive all the way to Langley or Coquitlam to get our shopping fix. It’s definitely starting to look much better. The last phase of the project, 224th Street between Spirit Square and Dewdney Trunk Road, is to be completed before the end of March 2011.
Now that so much of our money has gone into this downtown enhancement project, it would be good for City Council to give some thought to some other important, and much cheaper, ways to make the downtown core a more pleasant place to be.
The streets in Maple Ridge are clearly built to improve the flow of cars. Many roads, especially the newer ones, are quite wide, which – possibly unconsciously – often makes drivers go just a little – or sometimes a lot – over the speed limit. I think a lot of people don’t think about the effect that fast moving and often noisy cars have on them as pedestrians or cyclists. They can raise stress levels considerably and generally make our streets less appealing for pedestrians and cyclists. So if we want more people to walk and bike, lowering the speed limit would be one way to make our streets more inviting for people and to encourage walking and cycling.
The maximum speed limit within any municipality in BC, according to the BC Motor Vehicle Act, is 50 km/h, unless signs have been posted stating otherwise. In school zones in Maple Ridge, the maximum speed is 30 km/h on school days between 8 am and 4:30 pm. The municipality can decide to post signs with lower speed limits elsewhere if desired, and I think this would be a logical next step towards a transformation of our downtown into a place for people instead of a place for cars.
Lower speed limits would not only benefit the livability of the downtown area. It would also mean a much better environment for businesses. Cars don’t shop, people do. Businesses are often quite hesitant to agree to any restrictions on car use, but this is more out of fear of the unknown than that it is based on facts.

In the Netherlands and other European countries, many cities have considerable restrictions on cars in their town cores: lower speed limits, and car-free zones. This idea is starting to catch on in North America too. Even New York has successfully experimented with this concept. These shopping streets are very popular among pedestrians and cyclists, and are generally the most sought-after by businesses to set up shop. Often these streets are lined with cafés and restaurants with outdoor terraces filled with people, taking a break from hopping in and out of the many inte 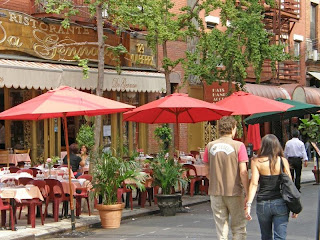 resting shops and boutiques, and enjoying watching the people strolling by. Some streets in Maple Ridge that could easily be turned into car-free streets are MacIntosh and 119th Ave., b 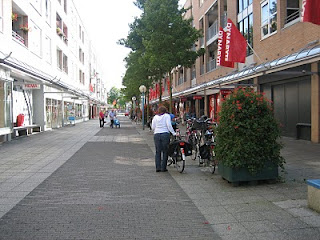 etween 224th and 223rd Streets. And 224th Street itself, between Dewdney and Lougheed, should actually be a prime candidate to be turned into a lovely pedestrian/cyclist street. After the improvements are all finished, it would just take some visionary developer to tackle the unsightly parking garages on the north side of Memorial Peace Park and replace them with a more exciting and appealing store or restaurant, preferably with apartments above, overlooking Memorial Peace Park. With some new interesting ethnic restaurants and nice boutiques this could satisfy the dreams of many Maple Ridge shoppers. Who knows, Maple Ridge may turn out to be the envy of Pitt Meadows residents, who may just prefer the village-type shops to its unimaginative Meadowtown mega-Mall. These dreams just may come true, if only we can keep the big boxes out of Albion!