Half of the polar ice cap is missing: Arctic sea ice hits a new record low 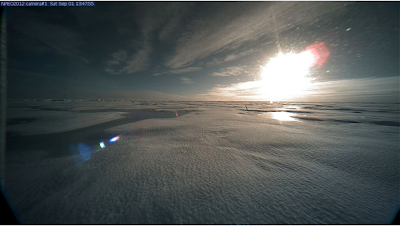 Extraordinary melting of sea ice in the Arctic this summer has shattered the all-time low sea ice extent record set in September 2007, and sea ice continues to decline far below what has ever been observed. The new sea ice record was set on August 26, a full three weeks before the usual end of the melting season, according to the National Snow and Ice Data Center. Every major scientific institution that tracks Arctic sea ice agrees that new records for low ice area, extent, and volume have been set. These organizations include the University of Washington Polar Science Center (a new record for low ice volume), the Nansen Environmental & Remote Sensing Center in Norway, and the University of Illinois Cryosphere Today. A comprehensive collection of sea ice graphs shows the full story. Satellite records of sea ice extent date back to 1979, though a 2011 study by Kinnard et al. shows that the Arctic hasn’t seen a melt like this for at least 1,450 years (see a more detailed article on this over at skepticalscience.com.) The latest September 5, 2012 extent of 3.5 million square kilometers is approximately a 50% reduction in the area of Arctic covered by sea ice, compared to the average from 1979 – 2000. The ice continues to melt, and has not reached the low for this year yet.
FULL STORY link
Bikes as barriers – a novel use Vive la révolution – from The Economist magazine