How to redesign car-centered streets

In Overvecht, car traffic will now be encouraged to use a ring road through the neighbourhood, while car accessibility to some of the significantly narrowed residential streets is reduced by blocking them off on one side. The residential “walking- and play-” streets, with wider sidewalks on one side of the street, will be much quieter and pleasant for pedestrians and safer for kids playing. The speed limit on these streets is reduced to 30 km/h. Shortcuts are provided for bikes and pedestrians, and a bike/pedestrian overpass will be built across the highway.

In many North American cities, including Maple Ridge, the belief is still that wider streets are safer for cyclists since they offer drivers enough space to safely pass cyclists, often without changing lanes and without having to slow down. The wide design of roads is generally aimed at improving car traffic flow, but traffic engineers often find themselves having to try and to fix the resulting speeding problems.

In car-dependent Maple Ridge, traffic engineers are generally quite reluctant to do anything to restrict car traffic other than some modest traffic calming. Two years ago I wrote a column in The News about a fight by local residents on Hill Ave. to not have barriers on their street removed to keep it quiet and safe for their kids. Unfortunately they lost. After an enthusiastic and successful start, the Bike to School program run by the Vancouver Area Cycling Coalition (now HUB) at Albion Elementary School in the same neighbourhood, also two years ago, has not resulted in more kids biking to school. Parents don’t feel it’s safe for their kids to bike to school.

It’s interesting that in Overvecht they’re removing the centre line from the residential streets. I believe these lines tend to encourage higher car speeds, since drivers feel “their” half of the road is clearly defined and higher speeds feel quite safe to them. By removing them, drivers tend to be more cautious and drive more slowly, which benefits livability. I’ve often thought that it might be beneficial to remove the center lines from some of the residential roads in Maple Ridge, which would make them look and feel more like residential streets, which they should be.

For example Westfield Ave. in Hammond: 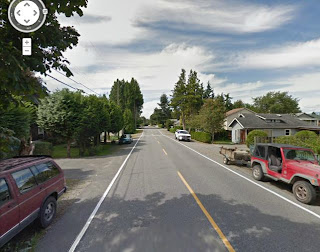 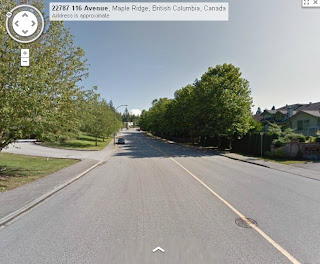 There isn’t that much traffic on this street, and there is no reason for it to be so excessively wide. This street has quite a few hills. If the car lanes are clearly defined by the center line, it makes sense to make the lanes going uphill wider (where the speed differential between cars and bikes is greater), and going downhill narrower. By removing the center line altogether, the overall road width can be much narrower. It’s clear that road design has an effect on driver behaviour. There also doesn’t seem to be any consideration to the cost and environmental impact of building wider roads.

Here’s another one: Kanaka Way at Creekside: 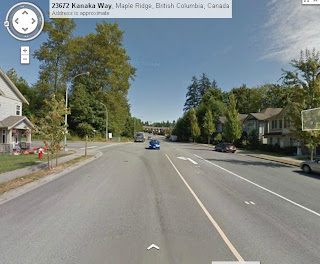 This is a road that will see a considerable increase in traffic in the coming years with the added development along 240th, and some neighbourhood commercial at the 240th Street/112th Ave. intersection. The design of Kanaka Way definitely encourages speeding and there have been a lot of complaints by residents as well as parents of students at Kanaka Elementary School. At the school a temporary traffic circle has been constructed as traffic calming, which will be made permanent this year.  Quite a few cars still zip through the traffic circle without even slowing down. One day I was biking through this traffic circle (I took the lane), when a car passed me in the middle of the circle, going full speed.

There has been one traffic fatality on Kanaka Way so far. A driver was making a U-turn without looking and got hit by another vehicle. I’ve often wondered how fast the other vehicle was going. Max. speed on this road is 50 km/h, but I think 40 km/h is more appropriate. Who knows how fast he was going, but I think it’s unlikely that the guy would have been killed if the vehicle that hit him was going only 40 km/h, which would have given the driver a good chance to step on the brakes.

Kanaka Way really makes no sense to me at all. Why create an arterial like this, where residents have to deal with all the negative aspects of an arterial: speeding traffic, noise, lack of safety, whereas they don’t have the advantages that an arterial should offer them: frequent transit, shopping and other amenities.

Be sure to watch the video at the end of the Bicycle Dutch blogpost that will give you a good visual idea of the effect of narrowing the streets and removing the center line.