Construction appears to be close to complete on the bridge over the North Alouette just north of the Equestrian Centre located on 132nd Ave. The approaches and span foundations on both sides of the river appear complete and if the span itself is being pre-fabricated, it looks like a crane could have the job done in half a day. 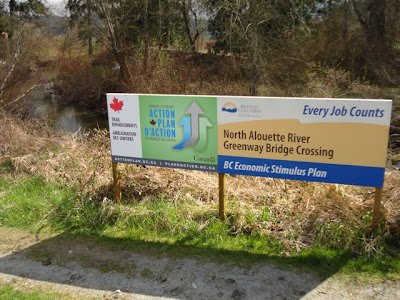 This is a very exciting prospect for horsemen and off-road cyclists as the new bridge will permit safe, tranquil and scenic transit essentially from the new Silver Ridge subdivision westward along 136th Avenue, then connecting up with the extensive dyke network in Pitt Meadows. Cyclists and horsemen could transit all the way to the Pitt River Bridge entirely off road. This is providing a much-needed alternate, recreational, east-west route to the now overcrowded and speed-prone 132nd. Avenue and the death-trap which is 128th Avenue (with no paved shoulder at all).
MR/PM Cyclist will keep an eye to the progress and post the opening here as soon as known. 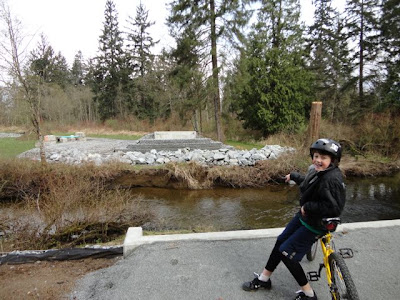