We organized this Bike to Farms ride together with Kim Lauzon as a fundraiser for the Golden Ears Community Co-op, which Kim is working on.

Everything just worked out perfect for this ride! We had a good turn-out, there were 12 of us. Even though the skies were grey when we started off from  Memorial Peace Park, it never rained, and before we knew it the sun came out and it was actually quite warm. We headed north on 224th, and made a loop via 124 Ave, Blackstock and then east on 128 Ave. to get to Golden Ears Cheesecrafters, our first stop. 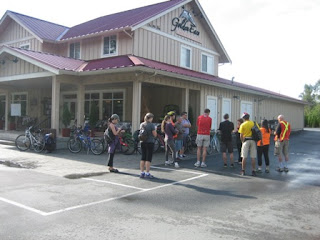 Golden Ears Cheesecrafters is a family business (mother, father and 2 daughters) that has only been in operation for 2 years. Mother Lynn gave us a tour, explaining how the cheesemaking process works, and I was amazed by the wide variety of cheeses that they produce. We got to taste some. My favourite was the cumin Gouda! Some of their cheeses have already won awards, and I’m sure many more will follow! We had time to sit down for coffee and I had a lovely homemade cranberry scone as well. Lots of interesting items in the shop as well, so I’ll have to go back some time to take a closer look. 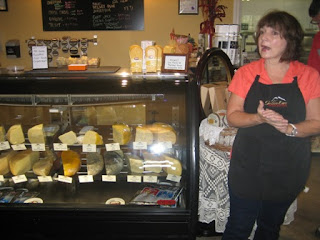 Ken was waiting for us, so we went on our way again, following 224th north up to Red Barn Plants and Produce. Like Golden Ears Cheesecrafters, Ken and Elke Knechtel of Red Barn are at the Haney Farmers Market every weekend, selling produce not only from their farm on 224th St., but also from the bigger farm that their son operates in the Okanagan, which enables them to sell a wider variety of vegetables and fruits. It seems is an awfully labour intensive operation, and to get all the work done, Ken and Elke get help from “Wwoofers”, an interesting program that links agricultural operations with volunteers from all over the world. They get room and board in exchange for labour on the farm. Ken also offers them bicycles and canoes and he takes them on hikes as well. 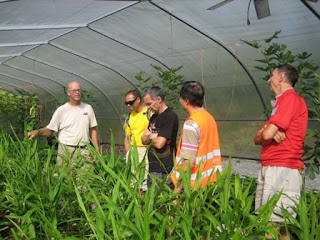 Ken and Elke grow quite a variety of crops, and they offer weekly boxes of whatever produce is in season in exchange for your support for the farm through an annual fee, which is called CSA (Community Sustained Agriculture). We got to taste some delicious cantaloupe and peaches grown on the Okanagan farm. Yum! What a difference with the tasteless stuff you buy in the grocery store! 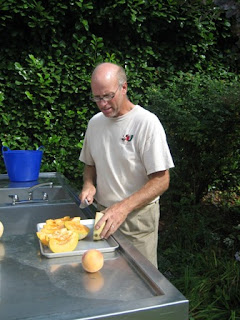 After this delightful visit, we had to move on to our last destination. We turned left at 136 Ave.. At the end of the road we got onto a horse trail, which ended up on the dikes. We were already half-way to Lorea’s vegetable gardens when we realized we lost someone: Jack! What happened? Well, Jack had been so involved in a conversation with Ken that he apparently never even realized that we were gone! Once Ivan had found him and they had caught up with us, we continued on our way on another trail that connected back to 136 Ave., much of which was an unpaved road. 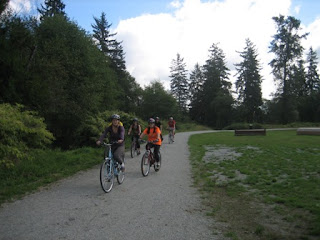 When we arrived at Lorea’s vegetable garden, she was ready for us! Her son and some friends had a lemonade stand, which was just what we needed. 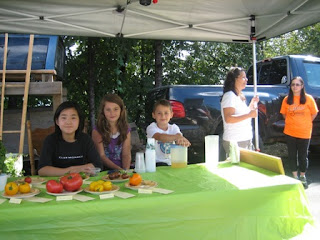 This was my 3rd tour of Lorea’s vegetable gardens, and every time I’m so impressed with what Lorea has accomplished. She manages to feed her family, with 5 kids, the whole year through from her garden, and also sells some of her herbs and delicious tomatoes to local restaurants. It’s a full time job! She’s always seeding, weeding, harvesting, processing, and every patch of dirt always has something growing in it. 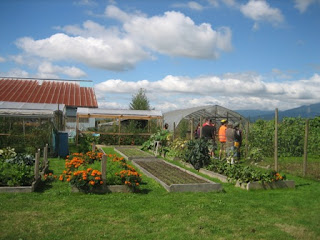 At the end of the tour Lorea asked us to taste her tomatoes – about 10 different kinds – and to rate them. With pleasure, of course! I’ll have to get some tomato plants from her next Spring!
After some hugs we were on our way again, back to the Farmers Market. It’s hard to believe that a 12 km bike ride can take almost 4 hours. Time sure flies when you’re having fun!
We’ll have to start thinking about our next Bike to Farms ride, because this was just too much fun!
More photos on facebook page about the ride.
Bike to Farms ride: Sept. 7 Bikenomics: How Bicycling Can Save the Economy