Mass transit is a way of life here in New York City. The subway is the artery that allows the city to survive at its famous pace. But with significant water damage from Superstorm Sandy, the New York City subway is still not running. Buses are back, but with limited routes.
With people getting back to normal following the one-day hurricane holiday on Tuesday, that meant today was a work day. And without the subway; that meant many New Yorkers used their feet to get there. While streets were jam packed with cars, taxis and buses — most of them going nowhere fast — the bike paths and sidewalks were inundated with flowing human traffic.
I rolled over to the Queensboro Bridge to see how it played out. It was fascinating to see so much human powered commuting in action. It was so jaw-dropping, it became an event in and of itself. Even locals stopped to take photos of the scene.
Full story and photo essay from www.bikeportland.org 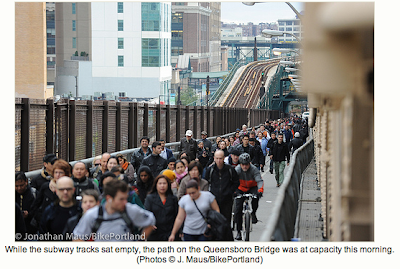