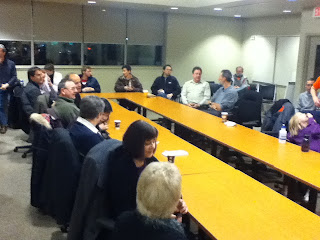 Richard Drdul is an active transportation specialist with more than 25 years of transportation planning and design experience. He has worked with more than 30 municipalities and regional districts throughout Western Canada in all aspects of bicycle and pedestrian policy, planning, design and implementation. His relevant experience includes work on the first Maple Ridge and Pitt Meadows joint Bikeways Plan in 1994.

This presentation was held in the Blaney Room at Maple Ridge City Hall, and was organized jointly by the Maple Ridge/Pitt Meadows Bicycle Advisory Committee and the Maple Ridge/Pitt Meadows Chapter of the Vancouver Area Cycling Coalition, after representatives of the local VACC chapter had attended an excellent presentation by Mr. Drdul at an advocacy workshop for the local chapters in October 2011. The event was publicized community-wide, and it was very well attended with some 40 people in attendance, including Pitt Meadows City Councillor David Murray, the new Council liaison for the Bicycle Advisory committee, Ike de Boer of Pitt Meadows Engineering, the new Director of Engineering of Maple Ridge, David Pollock, as well as Ineke Boekhorst, Executive Director of the BIA.

Russ Carmichael, Director of Operations of the District of Maple Ridge as well as staff liaison for the Maple Ridge/Pitt Meadows Bicycle Advisory Committee, and Ivan Chow, one of the co-chairs of the local chapter of the VACC, both gave a short introduction. Ivan Chow referred to the great things that are happening all over the world, now that more and more people are seeing the benefits of cycling for communities. As an example he mentioned the incredible progress that has been made in Vancouver in recent years. Russ Carmichael spoke about the work that was done in Summer 2011 by a group of about 20 dedicated cyclists to assess the existing bike route network in Maple Ridge and Pitt Meadows, as well as to make suggestions for  potential new routes and connections. The results of this exercise will be used to prepare the new Bikeways Plan and map over the coming months.

Between 1996 and 2006 about $100 million was spent in the region on cycling infrastructure. During that time the rates of cycling have increased in Vancouver/UBC (from 3.4% to 3.8%), but have remained pretty much the same everywhere else (1%).

24% of all bike routes in the region are in Surrey, but bike rates are not much higher than everywhere else in the “everywhere else” category.

Translink’s Cycling Strategy study has shown that in the past engineers and planners have focused on the “strong and fearless” (1% of total population) and the “enthused and confident crowd” (7%), while basically ignoring the needs of the largest segment, the “interested but concerned” (about 60%). The remaining 30% or so are in the “no way no how” category. The first two categories generally have no problem biking long distance, and are quite comfortable mixing with car traffic, while the interested and concerned group prefers separation from car traffic.

Richard commented that in all honesty he’s not exactly proud of some of the stuff he’s done in his earlier years of designing for bikes, when he was just doing what he had been taught to do and following design manuals. Some of the key points he has learned since then are that cyclists prefer infrastructure that separates them from car traffic, they like to make local neighbourhood trips, they want access to key destinations, they want safe and convenient parking, and they need guidance (signage).

He pointed out that 40 years ago, only 4% of trips in the city of Copenhagen, Denmark, were made by bicycle. Now that percentage has grown to 40%, since planners and engineers started focusing on the 66% of the population in the early seventies.

He explained the difference between different types of “improvements” that are made for cyclists. Sharrows (a bicycle symbol with two chevrons), which Richard considers to be “not an attractive facility”, are supposed to indicate to drivers and cyclists that the road is to be shared, but the experience is that they do not entice more people to try out cycling. It’s an easy and cheap way to add more routes to the bicycle network, but it doesn’t necessarily get people to use them. The problem with bike lanes is that they are often not wide enough, and frequently end where cyclists need them most. Width and continuity are key things for bike lanes. He mentioned the use of buffered bike lanes, which give cyclists more distance between cars and themselves and help solve the “perceived threat” by cars. The problem with buffered bike lanes is that often cars will park on them. As examples of high quality infrastructure for cyclists he talked about separate pathways and cycle tracks. Cycle tracks have more separation than buffered lanes in the form of grade separation, parked cars, planter boxes or other things that provide more of a physical separation.

Traffic calming is of great benefit both to cyclists and pedestrians, and Richard showed slides of various types of speed humps, a road treatment that is presently not allowed on on public roads in Maple Ridge. Speed humps can be built in such a way that they don’t slow down cyclists, but they will discourage drivers from speeding. Even though emergency services often don’t like speed humps, they are being used in many municipalities, and there are definitely safety benefits to road users that have to be weighed. Another traffic calming measure that Richard favours is traffic circles, which are quite effective in slowing traffic.

At the end of the presentation there was opportunity for those in attendance to ask questions. Ineke Boekhorst expressed an interest in finding out what would be good locations for bike racks in the downtown shopping area and was hoping to get input from cyclists. A suggestion was made to use pathways to connect roads as shortcuts and to increase and improve routes for cyclists.

Slides used during the presentation can be viewed here.