Union of B.C. Municipalities will look at highway bike lanes 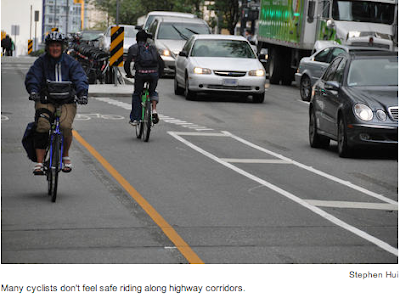 By Carlito Pablo, September 8, 2011
The municipality of Delta is suggesting separated bike lanes on highways.
It has submitted a proposed resolution for the annual convention of the Union of B.C. Municipalities, taking place September 26 to 30, asking the provincial government to “provide parallel routes, physical separation, and safe facilities for cyclists along highway corridors”.
Cycling is permitted on the shoulders of certain portions of provincial highways and bridges.
“It’s a matter of economics,” Delta councillor Heather King told the Straight in a phone interview about possible options for separated bike lanes.
King, who is running for mayor of Delta in this year’s civic election, said that cement barriers are preferred. But there are other alternatives. “They could put like a rumble strip, so if a car was going past their laneway into the cycling path, they would be aware of that,” she said. “But it won’t be a physical barrier. It’s less expensive to do that. It’s least desirable for safety.”
The UBCM resolutions committee has made no recommendation regarding Delta’s proposal. But the committee endorsed for approval a less ambitious resolution submitted by the Sunshine Coast Regional District.
The Sunshine Coast proposal urges the B.C. Ministry of Transportation and Infrastructure to increase the frequency of sweeping highway shoulders of gravel and debris as these pose risks to cyclists on bike paths.
Rob Wynen, chair of the City of Vancouver’s bicycle advisory committee, said that because cycling lanes on highways are only delineated by a painted line, they are not very attractive to many two-wheel enthusiasts.
“There is a danger level there, and part of it is they’re just not very well designed right now for cycling,” Wynen, a Vision Vancouver school-board candidate, told the Straightby phone about current highway infrastructure for cycling. “And with providing some separation, it can be much more than just accommodating cyclists. So what I mean with accommodating, it basically means allowing them to use the road but not making it really nice for them…not encouraging them, if I can use a better word.”
View article and survey in Georgia Straight
Discovery Ride #6 – Grand Opening of South Bonson Community Centre A Fun Family Biking Destination – Golden Ears Cheese Works