Despite a few raindrops we had a great time riding the Central Valley Greenway to yesterday’s Year of the Bike Party in Vancouver. Met up with some other people on bikes and got to enjoy some of the cherry blossoms along the way (yesterday was also the day of the annual “Bike the Blossoms”).

The VACC decided to give ourselves a new, fresh look and name, which – even though it had already leaked to various media – was officially revealed yesterday at the party. We are now called ‘HUB: Your Cycling Connection’!  This new name is intended to “refresh its image and broaden its perceived reach as a central organization for programming, advocacy and engagement across the entire Metro Vancouver region.’

Here are some pictures that Dave Rush took during the ride: 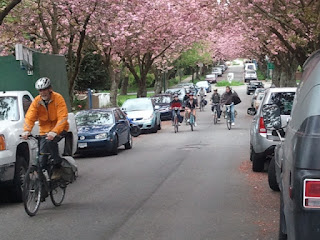 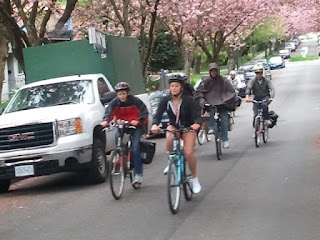