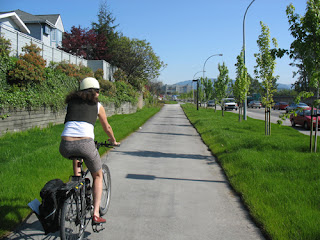 You are receiving this email because you have expressed an interest in participating in the Coquitlam Greenway Working Group.  The purpose of this group is to advocate for the extension of the Central Valley Greenway to the new Port Mann Bridge by 2013 (when construction concludes on the Port Mann/Hwy 1 Expansion Project).  This is a long-term and very worthwhile process that has roots dating back to 2006 when the Coquitlam VACC first identified the route.  I have volunteered to chair the group, and have stepped down from chairing the Coquitlam VACC to focus on this special project.  There are strength in numbers, and representation from the entire Lower Mainland in this working group gives us critical mass.
I envision three main areas that we need to address: 1) route selection; 2) government/commercial lobbying; and, 3) media.
1) Route Selection
It would be very useful to go on site and map out a detailed route alignment.  Lines on a map that have been ground-truthed have legitimacy.  This step also includes identifying land ownership.  To help us with this task, a friend of mine is going to fly over the route and film it on video.
2) Lobbying
Lobbying government (such as Coquitlam and crown corporation BC Hydro) and businesses (such as CPR) who are stakeholders is fundamental to the success of this project.  I see the majority of our effort being focus on this task.  Since 2006, we have lobbied the province (MoT, MOE), the City of Coquitlam and most recently CPR.  We need to step this up to include all potential parties that are affected by this route – and thus we need to understand land ownership.
3) Media
This story naturally attracts media attention – there have been two columns and one video shoot in the last month alone.  We need to keep the momentum.
I propose we meet on FEB 1 at 7 PM at the Coquitlam City Centre Library (next to Coquitlam City Hall) to develop a work plan along that broadly addresses these core areas. http://www.library.coquitlam.bc.ca/usingyourlibrary/HoursAndLocations/default.htm
I’m not and expert on this stuff, so if there are better/more efficient ways to accomplish our end goal then please speak up!
Please confirm your interest in this group and availability for Feb 1.
Open House – 122nd Avenue Streetwise Cycling courses