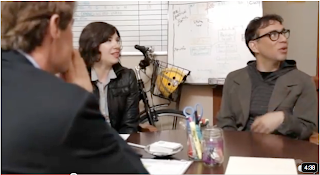 Some fun from the new TV series Portlandia, and opening scenes from episode two.

First, a pair of former musicians get an audience with the Mayor in is spiffy little office. He boasts about having the best website for a Northwest city under 700,000 population. He gave the award to himself.
The follow-up scene is a send-up of the urban warrior cyclist. Portlandia is a winner because of these great character archetypes. The sad part of we cable TV starved Canadians is that the program is not yet broadcast in our country. However, YouTube is filling up with clips of the three episodes, so just search the program name and you’ll find plenty.
I think in both scenes of the above clip Vancouverites will find some of the parallels to home pretty amusing. The Gregor-esque mayor is played beautifully by Kyle MacLachlan. And Portland’s real mayor, Sam Adams, plays a cameo as MacLachlan’s assistant.
Businesses Voice Support Since Start of Bike Lanes Take bikes away from helmetless riders: Maple Ridge councillor